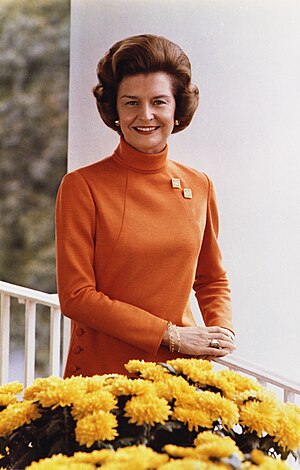 I remember very well the day that the news was released that Mrs. Ford had breast cancer.  It was 1974, I was a young mother, and breast cancer had not really invaded my life at that point.  I only had a distant aunt who had been diagnosed with breast cancer and a cousin, who would be diagnosed soon.

I had not finished my nursing education (yet).  My father had passed away, I had to drop out of school, and then marriage and babies came along.  Yet as I look back I find it very odd that when I finally made it into the surgical suite as a nursing student my first case was a modified radical mastectomy.  I got the case because I was a married student.  That is how things went down in the “olden days”.

As an RN we had to use the proper anatomical names for “pieces and parts” but the newspapers could not do that.  Mrs. Ford’s breast cancer was referred to as “female cancer”.  The irony there is that breast cancer can dwell in male breasts too.

Mrs. Ford was the epitome of bravery to go public with breast cancer.  A truly amazing woman who will be missed.  However the one thing Mrs. Ford taught me, and countless others, was how to thrive afterwards. She never allowed her diagnosis to hold her back.   She continued on in life to give back over and over again and truly is a woman to be admired and/or to mold ourselves after.

I know many of us were saddened to hear that she had passed on, but she lives on and she teaches us to thrive.

I do not know her personally, but her story is from the “olden days” and was shared with me from her son, a friend of mine.  It will paint a picture of how much more difficult it was to thrive in those days and to move forward with thriving for many women.  Watch for it.