The pen is mightier than the sword.  I took Samsung to task and got all new appliances after mine crashed within a month.  Social media is a wonderful place to take on big corporations.

Yesterday I allowed a young woman to make me feel like a peasant in a field of my life that is emotionally near and dear to me – breast cancer.  I did some work for a corporation that hired professional people to put together a PR piece  that would be presented at a well-attended trade show which in turn would make this corporation money.

I am a professional.

At the helm of the decision making process on reimbursement for the expenses I incurred and handed in to them, I am being treated in a highly unprofessional manner and made to feel like a peasant.  Throw me some rotting produce and I will be grateful and go away seems to be the thought of a young woman who sent me an email saying no to reimbursement in the form of cash, and offered product.

I have a motto I live by – “There are NO Little People” and yet I realize that others do live by the class system, and to them there are little people who would be grateful for rotting produce being thrown from a train as they stand by the tracks. That is not me.

I give respect, I get respect and shame on the person who thought that they could exchange my incurred expenses for items from their product line.  Shame on this person for attempting to make me feel like a peasant.  While this may be her culture that she was brought up with, it is not mine. 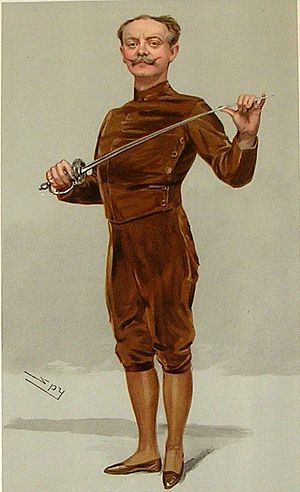 Caricature of Egerton Castle. Caption read "He insists that his pen is mightier than his sword". (Photo credit: Wikipedia)