I live in a smaller town about 45 miles north of Tampa.  Many people think Florida is all beaches, sand, palm trees, and high rise condominiums.  I am here to tell you that most of Florida is not like that at all.  We do have coastline that is not developed and we do have a middle of the state that goes all the way up to Georgia and across the Panhandle.  We have horse farms, cattle ranches, fish 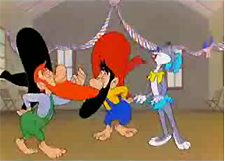 camps, and a lot more.  I live in a nice development and I can hear horses, and roosters.

Our county isn’t doing well in the unemployment arena.  Last I heard we were either highest or second highest in the state.  We also have a lot of that “good old boy” mentality when it comes to running a county and I am beginning to understand why so many people drive into their gated communities and shut out the rest of the county.  Sometimes it is like dumb and dumber here.

Several years ago Target and Kohls built stores in an almost otherwise empty shopping area off Spring Hill Drive.  The road that crosses Spring Hill Drive and extends into the almost empty shopping area runs north and south through Springwood Estates.  Many of the people who live in Springwood Estates got their underwear all in a bunch about the potential increase in traffic and went to the Hernando County powers that be to make their point.

You have to love the decision that was made.  2 traffic circles were constructed to “slow” traffic down and no left turns were allowed any longer at the northern most end of this road onto Powell Road.  This put more traffic into my development because you can turn left on Powell Road so score one for the geniuses who run this county.

The county installed rubber stakes into the middle of Powell Road to halt left turns.  Some have been knocked down by people still making left turns illegally and one of these days someone is going to die.  I can see a big lawsuit coming there.

But let’s get back to these traffic circles.  Hey Hernando County – newsflash – we don’t live in Europe or cute little towns where people understand the rules of traffic circles and understand who has the right of way. 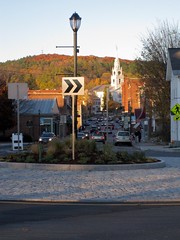 These circles do not come with pretty signs like this one does in the picture.  I have almost been hit 3 times because people do not understand the first one in the circle has the right of way.  They don’t give a rat’s ass.  Last night this woman just came through as I was already in there, I had to hit my brakes and a very good bottle of Cabernet Sauvignon hit the floor and shattered (without breaking).  It started to leak and there I stood on the side of the road while it slowly emptied onto the pavement.  I would say the ants were smashed last night.

Traffic circles, what the hell were you all thinking.  Speed bumps would have been cheaper and less dangerous to those of us who know who has the right of way in said circle.