If you are going on a Carnival Cruise or thinking about going on one here is my survival list for you  and a list of suggestions for Carnival too. 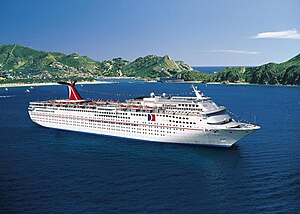 1.  The Food – as far as having an enjoyable meal on your ship, forget about it.  The food was mediocre to what you would expect at a cheap restaurant buffet at best.  Every chicken dish was tough, I am beginning to wonder if that was chicken at all or some other tough bird.  Maybe it was old tough chicken.  Whatever it was terrible.  The beef was also tough and grainy.  The potatoes in the ramekins were not cooked through.   I do think your Pizza and your Panini’s were passable so my advice is eat Pizza and Panini’s while on board 3 times a day.  Sorry but the pasta wasn’t tender either.

2.  The Smell – the ship reeked of cigarettes every where.  I expect that in designated smoking areas, but this was everywhere and I think a lot of that is due to the fact that this is one old ship that needs renovating and possibly a complete cleaning but wait that would take it out of service for a week and ka-ching there goes some profit. (We sailed on the Elation).

3.  The Security – was missing.  Children were running amok everywhere.  They were holding races up and down the stairs against their counterparts who were in the Atrium elevators.  Also there was one 6 year old completely lost on the M deck, and no one was able to locate anyone to help him, where are the phones to call for help?  Parents this could have been your child.

4.  The Staterooms – are in fact dirty.  Smudged glassware, dirty desk drawers, dirty shelving in the closet.  No excuse for this at all other than your staff is not being supervised to do the job they are supposed to do.   I don’t need towel creatures, I need a clean stateroom.  I do not want to see cockroaches either.

5.   The Pool – has a sign no diving yet in fact people were diving.  There is a lawsuit just waiting to happen, as a cruise line are you afraid to speak up to those who break the rules?  And where was the lifeguard/supervision at the pools?

7.  Double booking – of specific rooms for groups should never happen.  Yet it did, and that is just one hand not knowing what the other is doing.  Computer schedules are made for a reason, someone fell asleep at the wheel (thankfully not the Captain) and several of our meeting rooms had other groups assigned to them at the same time.

8.  The Drinks – since when does anyone order a soft drink and get handed an unopened can of soda and a glass of ice.  Whatever happened to opening the can and pouring the soda?

9.  The Sushi Bar – last year we sailed on The Liberty and we got real tuna, this year we got something called tuna paste.  It looked like it came out of a baby food jar – maybe you should cut corners elsewhere but not on the Sushi Bar.

10. The Ship – a vacation is something people save their money to go on and expect to be treated like guests in your house.  This is not so with your cruise line.  No guests of my house would ever go through what we went through on your ship, the worst being the bad food.  The Fun Ship is anything but and I will not recommend Carnival Cruise Lines to any of my friends or family and I won’t ever sail with you again.  I do realize you own quite of few other lines and that sailing on your upscale ships is a pleasure.  I will give that fact the benefit of the doubt with next year’s cruise on Princess but if it isn’t up to my standards I will be blogging, Tweeting, Facebooking, and more about how your WalMart style of cruising.  I would expect what I saw if WalMart owned and ran Carnival.  Shame on you – now go  find some more great hairy chests to film while the rest of us sail in sophistication.