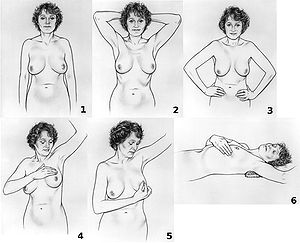 Today I would like to introduce you to Kelly Zdelar who has been a friend of mine on Facebook for over a year now, yet we have never met face to face.  I found her when she wrote a comment on the status of a mutual friend that she is a breast cancer survivor and I sent her a friend request immediately.

Kelly shares her very poignant story here with all of us today as a guest blogger and I am so happy she agreed to tell her story because her story comes from the perspective of being diagnosed at a very young age and before the recommended age of mammography.  Breast self-exam saves lives too as you will read in Kelly’s amazing story.  Are you following this illustration.  Kelly is – join her.

As a teenager in the 70’s I was encouraged by my mother to do monthly self breast exams.

She had a diagram of how they were to be done taped to the inside of her bathroom cabinet that she had cut out of the newspaper and kept it there as a continual reminder to do them herself.

I saw this diagram every time I borrowed her  make up, perfume, shampoo. Which means, as a teenage girl, I saw it every day.

I am sure that I didn’t do the monthly self exams on a regular basis when I was young, but in 1989, one of my best friend’s sisters died of breast cancer at the incredibly young age of 29.

I had met Mary in college and she was one of the most beautiful women I have ever known.

Mary’s death shocked me into doing self exams on a much more regular basis.

That is how I first found a suspicious lump when I was 34 years old.

When I first found it I thought, it was tiny, I would just keep an eye on it and see if there as any change over a short period of time.

It didn’t go away and I thought it might have been bigger the next month, so I scheduled an appointment with my doctor.

He didn’t find anything alarming but scheduled a mammogram anyway.

The mammogram was negative, no suspicious lumps.

Shortly after this, I changed jobs.

My new job did not offer health insurance for six months.

Therefore I tried to ignore what I feared to be a growing mass in my left breast.

Well, once I had insurance, I scheduled my appointment again with the same dr.

He performed a breast exam and I knew.

He told me immediately that I needed another mammogram and he contacted a Breast Surgeon, Dr. Lee Sprance, from the Barberton Breast Center, who specialized in Breast Cancer and she agreed to see me the next day.

My cancer had progressed almost to a stage two breast cancer and surgery and treatment began immediately.

At that time, I was a divorced mother with a four year old daughter.

I was terrified of the upcoming treatment, but even more terrified how this would affect my daughter.

The type of cancer that I had was both progesterone and estrogen positive.

The fact that I was currently on birth control pills meant that I had been feeding my cancer every day.

I was told that if I had not sought out medical treatment when I did, it would have quickly become a tragedy  because Breast Cancer in premenopausal woman is generally much more aggressive than in post menopausal patients.

I underwent surgery, chemotherapy and radiation therapy over the next year.

This was the most challenging time of my life.

The two moments that I remember most vividly were the day that my mother cut off my hair, as it had begun to rapidly fall out.

Mom kept the brave face while doing this awful job, but I caught her crying in the bushes when I went in to look in the mirror.

That broke my heart knowing how scared she was for me, her only daughter.

And after my hair was gone, there was the day that my daughter was happily singing in the bathtub playing with her barbies.

I came in to check on her and I was not wearing anything on my bald head.

She looked up at me happily, saw my bald head and tearfully asked if she was going to lose her hair too.

I told her that no, my hair fell out because of the medicine I was taking to make me well, and reminded her that she was not taking that medicine.

She then asked me to wear a hat because my head scared her.

My goal was so simple at that time.

My prayers were very basic.

That’s all I asked.

In the past 15 years, I have told my story at our state capitol in  Columbus and in our country’s capitol, Washington DC speaking to our government representatives all in an effort to effect a change with funding for cancer research and  for uninsured Americans to receive more effective health care insurance.

I volunteered for everything I could all in the hopes that one day, I would be given the opportunity to speak to the one group I desperately wanted to address. That goal was fulfilled when I spoke at Cloverleaf High School, to a packed gymnasium full of students, my daughter in attendance.

Talking to teenage girls has been my goal since this journey began.

I believe that all things happen for a reason.

I developed breast cancer at a dangerously young age and survived because  my mother taught me the importance of monthly self breast exams and hopefully I have taught my daughter as well.

But as all of you parents know, just because we tell them it is important, doesn’t mean that they will remember to do it.

Please remember that when you are nagging your daughters to pick up there rooms, nag them to save their own lives too.

Quite simply, I saved my own life and you can too.

Monthly Self Exams are the number one way to detect this deadly disease at its earliest stage.

Grandmothers, mothers, sisters, aunts,friends and for me, most of all,  my daughter, a few minutes a month can save your life.

If my story encourages one woman to begin regular monthly self exams, then I am on my way to accomplishing my goal in life, and that is to save one life..

It could be yours.