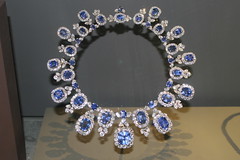 One more day to go in this year and who doesn’t want to leave all the old baggage behind?   No one should be starting the new year wearing any issues around their necks like a cheap necklace.  Cheap necklaces don’t sparkle and shine for very long and leave a mark on your skin that people can see.

People start pointing at this mark and they are thinking “I know who brought their issues into 2011!”   That mark is a dead giveaway that you did wear your issues at midnight so think about ways to toss them into the trash.  You can choose to do this after all you have freedom of choice – it’s a right.

I have been writing about choice recently because I have been trying to get people to realize that when you make a choice you own that choice.  For example I wrote about my mother who was a mean woman.  She chose to be mean, I did not make her mean, it was her choice.  I wrote about my friend, Jackie, who buried both her parents this year.  She told me how it made her sad that her mother was a busy woman always attending meetings and clubs.  I told Jackie that was her mother’s choice in life and for the first time Jackie looked at her mother in a different light.  She always thought her mom did not want to be around every night.  I suggested her mother felt that Jackie was a well-adjusted child who was okay about it all.

We all have issues, sometimes it seems like there is should be “An Issue a Day” calendar.  We could just flip a page everyday and a new issue would be there staring us in the face.

Or we could make the decision to leave them in 2010-put them into little or big storage boxes and place them out in the trash.  DO NOT PUT THEM IN THE RECYCLING BIN.  That won’t work because recycling issues is not a good idea at all.

If you want to sparkle in the new year think of all the blessings in your life because the blessings are what make your life easier and then sparkling is an everyday event.  Get rid of those old issues like they are cheap necklaces.  I prefer diamonds, how about you?

In Love? Or in Control?
Surviving Family Secrets - I Have Questions
2010 Was an F-N Incredible Year